Moderation is for Monks, Take A Stand

I’m on team Driftglass about this: there is not a single Republican that is worth fighting for.

I got an earful the other day about how not all Republicans are crooks just because Trump is, blah-blah-blah. OK, but because they are not standing-up against his criminality, then they are his accomplices, and you know what? THAT MAKES THEM CROOKS.

That the non-indicted Republicans are doing nothing to bring the radical Republicans back in line is all you need to know that they are fine with the crimes, and that includes the Very Concerned Caucus. If they look the other way, then they are not looking at the problem of their very own party. Lead or get outta the way, Mitt, Lisa, Susan, et al.

The GOP treats criminal behavior as normal, and because it furthers their goals (tax cuts for billionaires and whatever it takes to get them), they see it as desirable. The GOP has adopted as a central plank: corruption, racism, misogyny, and all the assorted -phobias (Islam-, trans-, homo-). If individual Republicans loudly don’t disavow these things, then they are fine with them. If they are not OK with hatred as a core principle, then they should leave their party.

At this point we must conclude that being in the Republican Party is a character flaw.

Don’t Cokie Roberts at me, bro. Only one of our two major political parties has embraced a life of crime and that’s the Republicans. When someone tells you that the Republicans are not all crooks, ask them to name one and then ask them where they stand on supporting Trump. QED. 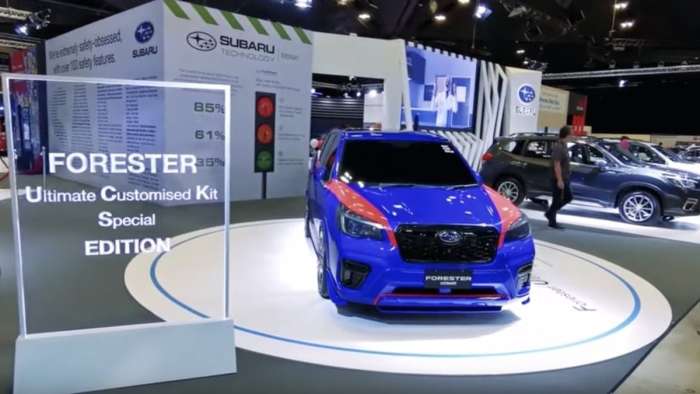 From Torque News (via Scissorhead Bruce388) – Click the image to read the story!

You cannot convince me that this was accidental.

(Hat tip: Scissorhead Bruce388 who’s run out of Foresters to give. So to speak.)

“If I can pull this off, I will feast like a king,” Spot thought.

A Kansas City area radio station can broadcast Russian state-owned media programming, the type that U.S. intelligence called a “propaganda machine,” for six hours a day through a lease agreement struck by a local radio operator.

The lease agreement lets RM Broadcasting air its programming from 6 to 9 a.m. and 6 to 9 p.m. seven days a week. KCXL’s website, which says that it’s the radio station that will “tell you the things that the liberal media wont (sic) tell you,” lists Radio Sputnik in its morning programming.

I guess they saw an opening that Faceberg missed.

UPDATED: Censoring History Is Not A Good Look, Trump

Trump, summarized, and you can sing it!
(H/T: Scissorhead Skinny-D)

In an exhibit meant to document the Women’s March that took place in 2017 the day after President Trump’s inauguration, the National Archives blurred some parts of an image that showed anti-Trump messages, The Washington Post reports.

The 49-by-69-inch photograph contrasts the large-scale march to a 1913 image of a women’s suffrage march. But while the photo shows the thousands of demonstrators who showed up in Washington, D.C., many in protest of Trump’s presidency, it obscured some key details.

A sign reading “God Hates Trump” was blurred so that it simply reads “God Hates,” the Post reports. Additionally, a sign reading “Trump & GOP — Hands Off Women” has “Trump” blotted out, and one reading “This Pussy Grabs Back” is edited to eliminate “Pussy.”

The official record of the United States, people. This is material that future academics and historians will be turning to. Like Orwell predicted fascistic regimes would do, Hair Füror is censoring history. Into the memory hole.

A number of people have emailed asking how we learned the National Archives had altered the photo from the 2017 Women’s March. The short answer is: chance. The little bit longer answer I’ll explain in this thread.
1/?

We made a mistake.

As the National Archives of the United States, we are and have always been completely committed to preserving our archival holdings, without alteration. pic.twitter.com/VTWOS4R7GY

The ‘I Never Met Him’ Files, Cont.

JUST IN: The House released even more materials from Lev Parnas, including new texts messages that show extensive contact between Parnas and a staffer to Republican Congressman Devin Nunes.#Hardball pic.twitter.com/Vl5Lkw5Daa

“House Democrats released new documents Friday evening showing extensive contact between an associate of President Trump’s personal attorney and an aide to the top Republican on the House Intelligence Committee regarding the effort to obtain material from Ukrainian prosecutors that would be damaging to former vice president Joe Biden.

“The text messages between Lev Parnas, who functioned as Rudolph W. Giuliani’s emissary to Ukrainian officials, and Derek Harvey, an aide to Rep. Devin Nunes, the ranking Republican on the House Intelligence Committee, indicate Nunes’s office was aware of the operation at the heart of impeachment proceedings against the president — and sought to use the information Parnas was gathering.

“The newly released texts show that Parnas was working last spring to set up calls for Harvey with the Ukrainian prosecutors who were feeding Giuliani information about Biden. … The messages also show that Harvey met with Parnas and Giuliani at the Trump hotel in Washington. Harvey and a spokesman for Nunes did not immediately respond to requests for comment.”

Nunes aide to Lev Parnas: “Any documents for us or are you going to keep working through Solomon?” https://t.co/gD0JX8A732 pic.twitter.com/okZKAAtXDb

As you all know, Nunes claims that he doesn’t remember ever meeting Lev Parnas, even though phone records released in the Impeachment Evidence shows several back-and-forth phone calls, and now this. So he was part of the Pantheon of Dunces that was trying to strong-arm Ukraine into announcing an investigation of the Bidens and later was defending Prznint Stupid for strong-arming Ukraine.

I’m only a sonofalawyer, but that seems to me to make him an accomplice. He needs to be removed from office.

And on another Nunes Note, our hero Ted Lieu won the innernets last night:

The U.S. Department of Agriculture has taken another whack at former first lady Michelle Obama’s signature achievement: Establishing stricter nutritional standards for school breakfasts and lunches. And on her birthday.

On Friday, USDA Deputy Under Secretary Brandon Lipps proposed new rules for the Food and Nutrition Service that would allow schools to cut the amount of vegetables and fruits required at lunch and breakfasts while giving them license to sell more pizza, burgers and fries to students. The agency is responsible for administering nutritional programs that feed nearly 30 million students at 99,000 schools.

Unbelievable, right? Imagine hating the Obama’s so much that you decided to eff with 30M kids just to spite her. But how do they justify doing that?

Lipps said the changes will help address what he described as unintended consequences of the regulations put in place during the Obama administration. For example, when schools were trying to implement innovative solutions such as grab-and-go breakfast off a cart or meals in the classroom, they were forced to give kids two bananas to meet minimum federal requirements.

So, because they had a supply chain problem, the USDA decided to scrap the rules rather than find a more reliable supplier, but you know, it wouldn’t hurt the Obamas’ feelings, and really, that’s all that mattered.

It isn’t so much that they block out sound as it is no one will talk to you.

Bill Mitchell argues that Trump can’t be impeached for obstructing Congress because “the president’s job is *to* obstruct Congress.” pic.twitter.com/p5GNDngffT

Some more excerpts from A Very Stable Genius are making their way into the media:

Now an excerpt of a new book published in The Washington Postdemonstrates exactly what tipped Tillerson over the edge. An account of the meeting in the upcoming book A Very Stable Genius: Donald J. Trump’s Testing of America depicts Trump becoming increasingly angry as his generals tried to teach him the fundamental basics of American post-war history.

The book states that the meeting took place six months into Trump’s presidency after his generals became concerned about “gaping holes” in Trump’s knowledge of America’s key alliances. The idea was to bring Trump to the Pentagon’s Situation Room, where military leaders, so the plan went, would give him a crash course on who America’s allies were, why they were worth keeping on side, and where on earth they were located.

Right off the bat, my hackles are getting raised. I’ll explain later.

However, the meeting seems to have descended into chaos almost immediately. Tillerson, then-Secretary of Defense Jim Mattis, and National Economic Council Director Gary Cohn reportedly took turns trying to explain their points to Trump. But Trump is said to have first appeared bored out of his mind before he got increasingly angry.

The account states Trump repeatedly interrupted the lesson after apparently being triggered by a word or phrase uttered by the military leaders. One example given is that he heard the word “base” during the lesson, which sparked him into launching a tirade about how “crazy” and “stupid” it was that the U.S. paid to build and maintain bases overseas.

Prznint Transaction is transactional. Got it.

Trump is then said to have complained about President Obama’s Iranian nuclear deal, and the length of the war in Afghanistan. Each time, his generals reportedly tried to gently explain why his view of these complex geopolitical issues might not be entirely accurate. It was reportedly during a conversation about Afghanistan that Trump blew his top.

The president reportedly called Afghanistan a “loser war,” and told his military leaders: “You’re all losers… You don’t know how to win anymore… I want to win… We don’t win any wars anymore… We spend $7 trillion, everybody else got the oil and we’re not winning anymore.” It’s reported that Trump was so angry at this point that he wasn’t breathing properly.

In his most incendiary comment, Trump—a man who, remember, managed to get out of military duty in Vietnam due to a supposed bone-spur problem—is said to have told the assembled forces: “I wouldn’t go to war with you people… You’re a bunch of dopes and babies.”

…When the meeting ended soon afterward, Tillerson reportedly stood with a small group of confidants and said: “He’s a fucking moron.”

OK, that gives us some context to the widely reported Tillerson quote. But what we don’t really get is what triggered the actual outburst.

But here’s the thing that got under my skin: these WaPo reports got that story in 2017 and are only now telling us in an eff’ing 2020 book. What else are they withholding for book sales? This story is reported from one of the most secure locations on earth, they got the read out from someone, but they are NOT telling us the whole story.

What is the whole context?

So why am I supposed to trust the WaPo when they hold back information to only later use to tease a book. What’s the news editor process for determining what is in the pages of the newspaper and what do they save for making serious coin later? Who makes those decisions, what’s the criteria?

The whole basis for our faith in the news is that to the best of their ability they report the whole truth to us, not save some bits for years later. It’s a question of trust

Now that we’ve had an international incident with Cadet Bone Spurs ording a killing of a foreign Maj. General from Iran (in Iraq!) and potentially starting or escalating a NEW war in the Middle East, this book comes to us way too late. Shouldn’t we have learned this earlier? Maybe we could have done something about his clearly unstable mental state.

This should be old news, not new hot dish.

This is complete journalistic malpractice.