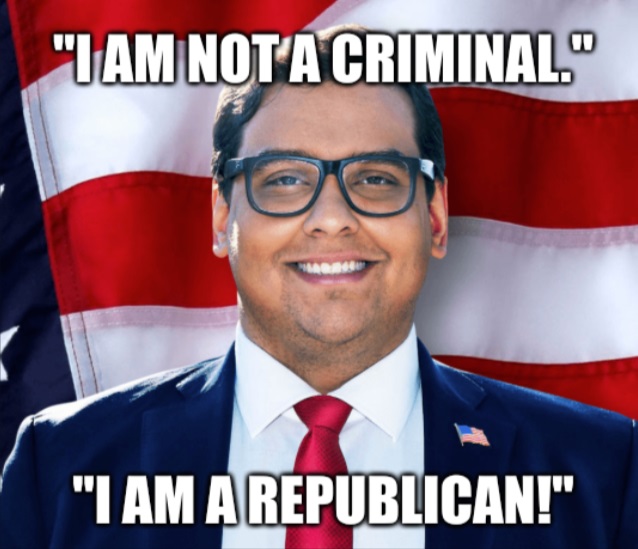 No crime is apparently too small for George Santos…

Truth-allergic congressman George Santos—or Anthony Devolder, depending on who’s listening—appeared at a 2021 Stop the Steal rally just one day before the Jan. 6 insurrection at the U.S. Capitol. And, according to a former friend and roommate, he was decked out in a stolen Burberry scarf as he gave his speech.

“It was not stolen, I modeled it on the runway during London Fashion Week,” Santos did not claim. “Ask my friend Kate Moss.”

In July 2020, a small Florida-based investment firm announced that a man named George Devolder had been hired as its New York regional director. “When we had the opportunity to welcome him to our team, I was delighted,” the company’s founder and chief executive said in a news release. “He’s a perfect fit.”

Devolder is now better known as George Santos, the 34-year-old freshman Republican congressman from New York’s 3rd Congressional District who brazenly lied to voters about key details of his biography. And the company for which he was “a perfect fit,” Harbor City Capital,is no longer in operation. Its assets were frozen in 2021, when the Securities and Exchange Commission accused it of running a “classic Ponzi scheme” that had defrauded investors of millions of dollars.

The SEC complaint did not name Santos, who has denied knowledge of the alleged wrongdoing.

Embattled Rep. George Santos persuaded at least one person to make a six-figure investment in a Florida-based company that the U.S. Securities and Exchange Commission later said was a Ponzi scheme.

Campaign committees tied to Rep. George Santos (R-NY) paid tens of thousands of dollars to newly formed companies with opaque histories and meager track records of working for other candidates,

Election law and campaign finance experts said the lack of public information about such companies and their leaders — and the lack of detail describing the work they performed — could raise questions about whether Santos paid inflated rates for unnecessary services performed by friends and allies, or possibly diverted campaign donations for his own use.

IF George Santos is his real name:

In 2019, George Santos introduced himself as Anthony Devolder, the founder of “United for Trump,” during a Q & A session at a “Walk Away LGBT” event in NYC.

Fun Fact: Santos (if that is his real name) says that Brandon Stratka is one of his idols.

This entry was posted in George Santos, Liars, Lying Liars Who Lie. Bookmark the permalink.