Today is the big day wherein we get to see just how rudderless Republicans really are, and have I mentioned lately that K-Mac is really bad at his job?

I’m having a hard time finding any news is that is not related to K-Mac or Santos today, so for what it is worth, this is what the hall monitors at Tiger Beat are breathlessly gossiping:

Welcome to the 118th Congress, the new Republican House majority, and one of the most unpredictable and potentially chaotic scenarios we’ve seen on Capitol Hill.

The House will gavel in at noon, and following a prayer, the Pledge of Allegiance and a quorum call, the clerk will immediately start the live roll call to elect the next speaker. GOP Leader KEVIN McCARTHY, however, still hasn’t clinched the votes he needs, and the day could drag late into the night, we’re told, as Republicans grapple with choosing their leader.

That vote will reveal how large the anti-K-Mac vote actually is. If only the five loud-mouthed MAGAs vote against him, then K-Mac will try to twist arms for that last vote. However, if a dozen Republicans vote against him, K-Mac is in deep merde.

And remember, this hasn’t happened since 1923. And the time before that? Yeah, the Civil War. Have I mentioned that K-Mac is historically bad at his job?

The definition of insanity makes a guest appearance:

Be prepared for surprises and a lot of drama. Even veteran lawmakers who emerged from meetings with McCarthy on Monday evening weren’t entirely sure how this will all shake out. We’re told that McCarthy’s plan, however, is to continue voting — over and over again — in a bid to wear down his detractors until he gets the gavel.

GOP lawmakers will first huddle in the Capitol basement at 9:30 a.m. in a last-ditch, closed-door effort to find harmony. Fat chance. On Monday night, McCarthy met with some of his critics, including Reps. MATT GAETZ (R-Fla.), LAUREN BOEBERT (R-Colo.) and SCOTT PERRY (R-Pa.), the Freedom Caucus chair.

[Punchbowl News: In a private meeting yesterday, Reps. Matt Gaetz (R-FL), Lauren Boebert (R-CO) and Scott Perry (R-PA) told Rep. Kevin McCarthy (R-CA) that they don’t mind if the speaker vote goes to plurality and Rep. Hakeem Jeffries (D-NY) is elected because they will fight him.]

Gaetz emerged saying he’s still opposed, and other McCarthy antagonists stood pat on Twitter. “Even after the McCarthy Machine’s attempts to whip votes and smear my name for several weeks, McCarthy is still well short of the 218 threshold,” wrote Rep. ANDY BIGGS (R-Ariz.), who will stand as a stalking-horse candidate for the opposition on the first ballot.

But McCarthy’s allies say they won’t be cowed by the “Never Kevin” crowd.

“If they think this is going to be a game of chicken, to see who’s going to blink first, they’re going to be sadly surprised,” Rep. GUY RESCHENTHALER(R-Pa.), the incoming chief deputy whip, told us. “We’ll be here until the Fourth of July voting for McCarthy.”

[Semafor: “Some backers say they have limits, however. One relatively ardent McCarthy supporter told Semafor that they would probably be willing to go up to 12 rounds of voting, which would likely last between 3 and 4 days. The aide to another, slightly less ardent supporter said their member would be willing to sit through 3 to 4 rounds, or about a day’s worth of action.”

“Meanwhile, a senior Republican staffer said aides were whispering that members might only tolerate just one or two rounds of voting before sitting down to try and strike a backroom deal on a compromise candidate.”]

But even McCarthy allies are now acknowledging he can’t win the first vote. One told us Monday night there are currently about a dozen members opposed. And that might be an undercount: The Daily Caller’s Michael Ginsberg and Henry Rodgers report that at least two members who opposed McCarthy in a November conference vote had not been whipped. One, Rep. TROY NEHLS (R-Texas), went on the record.

The arithmetic is stark. Of the 434 members set to be sworn in tomorrow, 222 are Republicans. McCarthy will need 218 votes, and his plan for shrinking the opposition from a dozen-plus to fewer than five is sketchy at best.

“But what about Dawson?”

Keeping this head of lettuce handy as the next House Speaker takes office, whoever it turns out to be: pic.twitter.com/Sr7M0BaY2d

Democratic leaders, meanwhile, are vowing that their members will all show up and vote for anyone but McCarthy — with the vast majority, if not all, calling out incoming Minority Leader HAKEEM JEFFRIES. If any Democrats decide to leave the voting early — or fail to show up entirely — they would help McCarthy by lowering the threshold he needs to vault.

We ran into Rep. PETE AGUILAR (D-Calif.), the incoming Democratic caucus chair, on his way out of Jeffries’ office Monday evening; he assured us Democrats would not be doing McCarthy any favors.

In other words, those 5 hardliner, Never K-Mac really could elect a Dem to be speaker. It won’t happen, but it shows you why K-Mac is probably not a happy guy on what should be his best career day ever.

Should votes drag into the wee hours of the morning, we could see Republicans move to adjourn until some future date, heralding a protracted speakership battle that would delay Republicans from staffing up committees, passing planned bills or even paying some of their employees. A majority would need to vote to adjourn, however, and it’s not clear rebel Republicans and Democrats would agree to regroup. 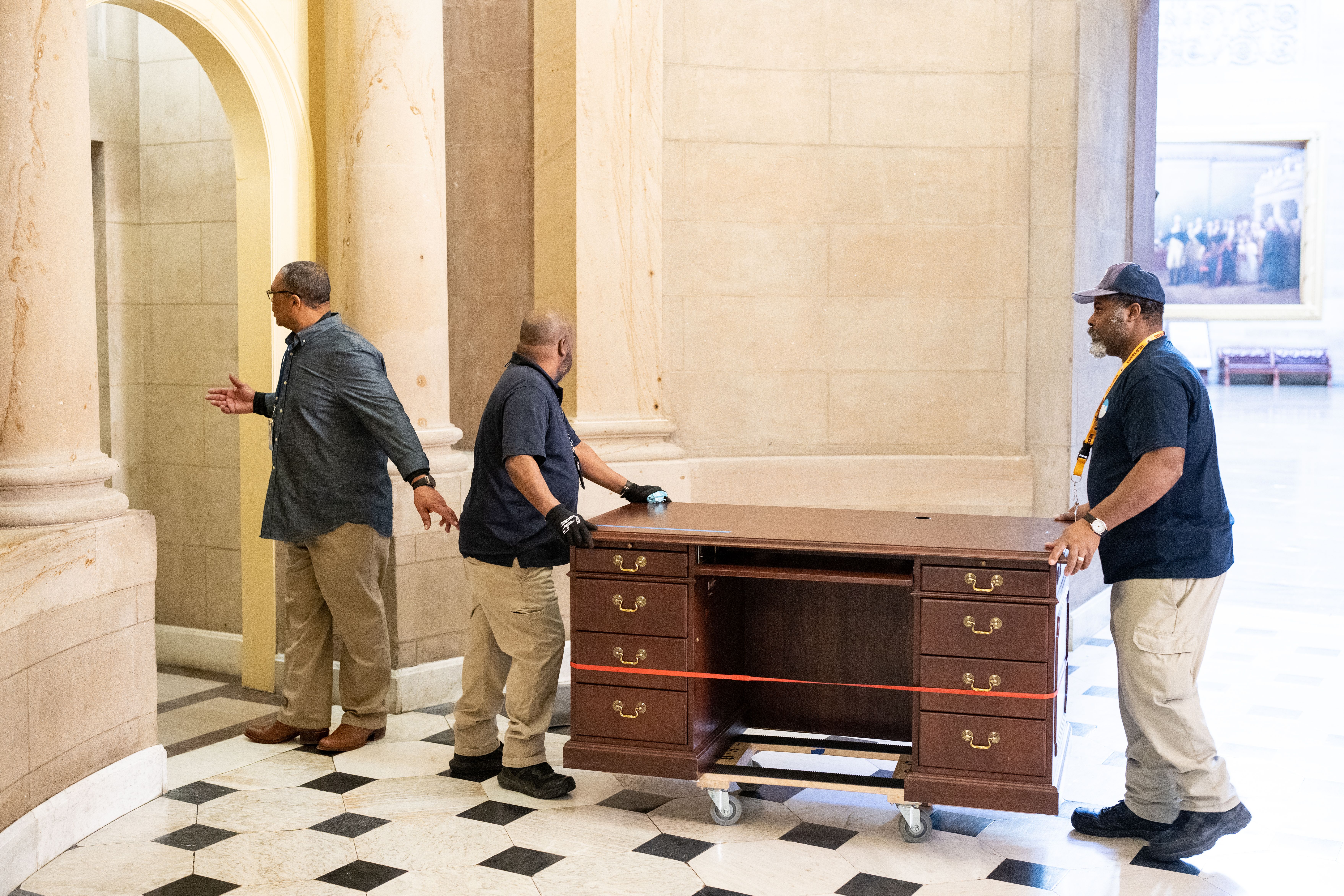 Amid the standoff, McCarthy is already working out of the speaker’s office — a move that has further fueled the perception among his critics that McCarthy is acting entitled to the job rather than earning it. Still, his relocation signals that unlike his last failed attempt at the gavel in 2015, when he graciously bowed out before the vote, McCarthy now intends to fight.

On another note, McCarthy has already moved into the Speaker’s suite, which we’re told is standard protocol.

But he’ll have to move back out if he doesn’t get the gavel, which is totally still up in the air. Just a remarkable moment we’re in. https://t.co/FXUJNnLhdn

I will enjoy watching them haul away his collection of Starbursts that he never offered Hair Füror.

And now a word from Republican donors:

Adding further to the chaos Monday was a late-breaking ultimatum from the Club for Growth. As our colleague Olivia Beavers scooped, the influential lobby group issued a “whip notice … urging a no vote on McCarthy — without explicitly naming him — if he didn’t concede to various rules being pushed by some of those opposing him, many of them members of the House Freedom Caucus.”

So it should be an interesting day, Scissorheads. And anytime we can watch Rudderless Republicans line up to kick one of their own in the ‘nads, it’s a good day.

“I’m not going to go away. I’m going to stand until the last four friends stand with me.”

This entry was posted in K-Mac Kevin McCarthy who is very bad at his job, Wingnuttia. Bookmark the permalink.