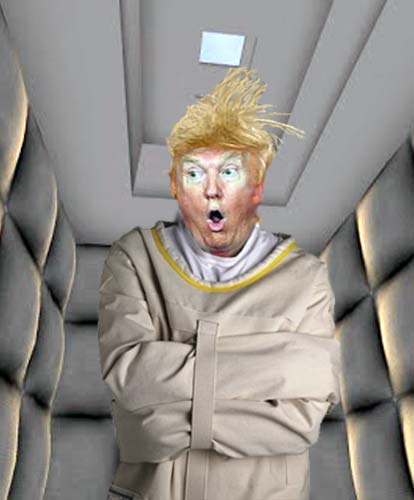 Former president Donald Trump on Friday lambasted the House select committee investigating the Jan. 6, 2021, attack on the Capitol but was silent on whether he would comply with a subpoena for testimony and documents in a 14-page letter sent to its chairman.

Does anyone believe that ex-Prznint Stupid could write 14 pages of anything?

“Despite very poor television ratings, the Unselect Committee has perpetuated a Show Trial the likes of which this Country has never seen before. There is no Due Process, no Cross-Examination, no ‘real’ Republican members, and no legitimacy since you do not talk about Election Fraud or not calling up the troops. It is a Witch Hunt of the highest level, a continuation of what has been going on for years.”

Oh. Wait. That does sound unhinged. And here’s the first sentence as it actually appears:

“THE PRESIDENTIAL ELECTION OF 2020 WAS RIGGED AND STOLEN!”

It’s like reading Valery Solanis’ SCUM Manifesto. It’s nuts and so is he.