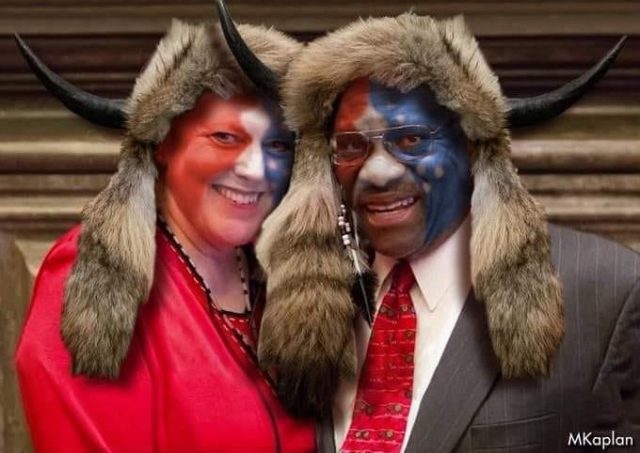 Lord love a duck, Ginni Thomas was in it up to her eyeballs and Clarence Thomas should resign:

Virginia “Ginni” Thomas, the conservative activist and wife of Supreme Court Justice Clarence Thomas, pressed Arizona lawmakers after the 2020 election to set aside Joe Biden’s popular-vote victory and choose “a clean slate of Electors,” according to emails obtained by The Washington Post.

The emails, sent by Ginni Thomas to a pair of lawmakers on Nov. 9, 2020, argued that legislators needed to intervene because the vote had been marred by fraud. Though she did not mention either candidate by name, the context was clear.

Just days after media organizations called the race for Biden in Arizona and nationwide, Thomas urged the lawmakers to “stand strong in the face of political and media pressure.” She told the lawmakers the responsibility to choose electors was “yours and yours alone” and said they have “power to fight back against fraud.

The WaPo has images of the emails in the story, too. The article goes on to list the many, many shell organizations Ginni is involved with and how they used all of them to pressure lawmakers. As Hillary Clinton famously said, a vast right wing conspiracy.

We now cut over to Axios email thingie to cut through the long WaPo article to the gist of the matter:

Driving the news: Thomas — who never specifically named Trump or President Biden — on Nov. 9, 2020, emailed a pair of Arizona state lawmakers asking them to follow their “Constitutional duty” and take steps to “fight back against fraud.”

Details: “Please stand strong in the face of political and media pressure. Please reflect on the awesome authority granted to you by our Constitution,” Thomas said in an email to Arizona state Rep. Shawna Bolick.

Context: The U.S. Constitution gives state legislatures the authority to direct how electors are selected in the state.

This is a big story. Let’s keep an eye on it.