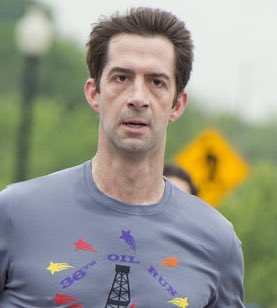 He’s running: he’s “written” a book and Fox News is marketing it.

Cotton, an Army veteran who served in combat in the Iraq and Afghanistan wars, a rising star in the GOP, and potential 2024 presidential contender, announced on Monday in an appearance on Fox News’ “Fox and Friends” and in this Fox Digital report that his new book is titled “Only the Strong: Reversing the Left’s Plot to Sabotage American Power,” and will release on Nov. 15.

We note for the record that fabulist BS about his military career has been repeatedly debunked.

Hey @SenTomCotton, unless you wore one of these berets you shouldn't be calling yourself a Ranger.

What’s the book about?

Republican Sen. Tom Cotton of Arkansas charges that Democratic Presidents Barack Obama and Joe Biden “have weakened America and emboldened our enemies” in a new book being released in the autumn.

It’s not a formal 2024 Goat Rodeo announcement (that makes fund-raising that much more scrutinized), but it might as well be if the humorless Q-Tip, a fiend who has taken human form, is releasing a book just in time for bulk sales and distribution to all the usual channels.