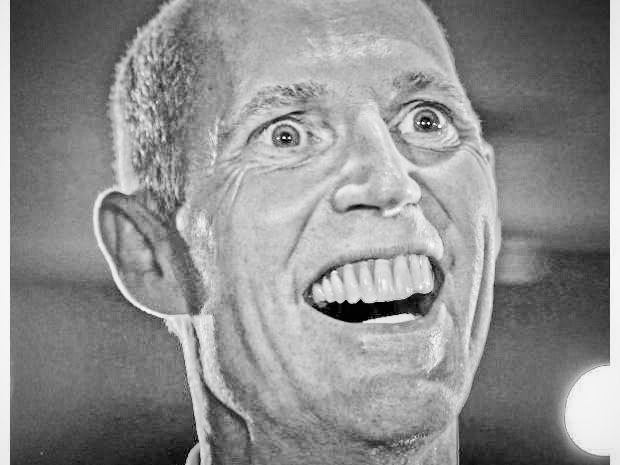 Remember last February when the Chairman of the Republican Senate Campaign Committee, Rick Scott, released an official Republican Senate Campaign 11-point platform so odious that even amply be-chinned Mitch McConnell took him to the public whipping post? You know, the plan that would sunset Social Security, Medicare, limit or end overseas voting (Support The Troops!) and impose a poor tax on half of America, you know, so that they would have “skin in the game?”

You don’t say those parts out loud, Sen. Batboy!

Now it seems he didn’t write it, it’s Democrat talking points, so the Dems wrote it! Who knew?!

"It's in the plan! It's in the plan. But Senator, hang on, it's not a Democratic talking point. It's in the plan" — even Fox News's John Roberts can't believe it when Rick Scott lies about his own policy plan, which calls for a tax increase on a majority of Americans pic.twitter.com/sa4WgUBgyJ

It’s important to note that Batboy’s 11-point plan is on the senator’s website, right now, this very moment.

Scott insists that no sane lawmaker would be willing to let Medicare, Medicaid, and Social Security expire, and that instead his proposal would be forcing the conversation about how to pay for them, which as we know from the Build Back Better demise is a piece of cake, amirite? I’m sure the Violence Against Women Act could talk to SS and Medicare about popular bills left to die while Republicans wage culture wars, you know, if VAWA could talk what with being sunsetted (is too a vurb!) since 2019 until only recently revived.

This entry was posted in 2024 Goat Rodeo, Medicare, Rick Scott, Social Security, Things that will kill us all, Wingnuttia. Bookmark the permalink.