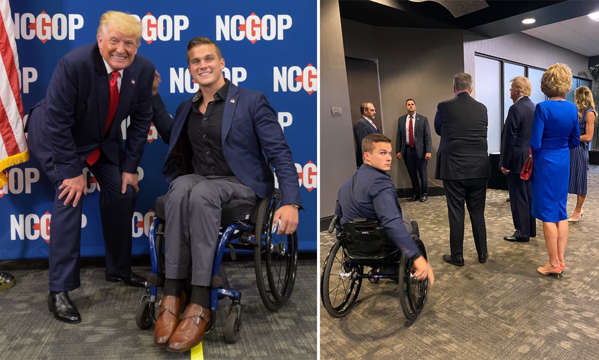 Habitué of the Eagles Nest gift shop and noted roller Nazi, Madison Cawthorn’s re-election in North Carolina is running into some unexpected turbulence:

Lawyers filed a candidacy challenge of the Republican on behalf of 11 voters with the State Board of Elections, which oversees a process by which a candidate’s qualifications are scrutinized. The voters contend that Cawthorn, who formally filed as a candidate for the 13th District seat last month, can’t run because he fails to comply with an amendment in the U.S. Constitution ratified shortly after the Civil War.

The 1868 amendment says no one can serve in Congress “who, having previously taken an oath, as a member of Congress . . . to support the Constitution of the United States, shall have engaged in insurrection or rebellion against the same.”

Well, by that logic most of the Republican incumbents cannot run, either. So this is more pressure on the Jan. 6 Committee to get those subpoenas to traitors like Gym Jordan and his icky ilk.

And in related Madison Cawthorn news, we are glad to report that he is dealing with the break-up of his marriage to the kompromat-arranged honey-pot (ALLEGED!) with his usual, steel resolve:

Madison Cawthorn was dealing with the pain of his marital separation in Florida last night. pic.twitter.com/0ZpK2hmYFM

It is a good thing our Xristian, home-schooled hero has such a strong foundation of Faith to rest upon. Faith is on the left, Chastity is on the right. Only guessing, of course.

11 Responses to NC Strikes Back!