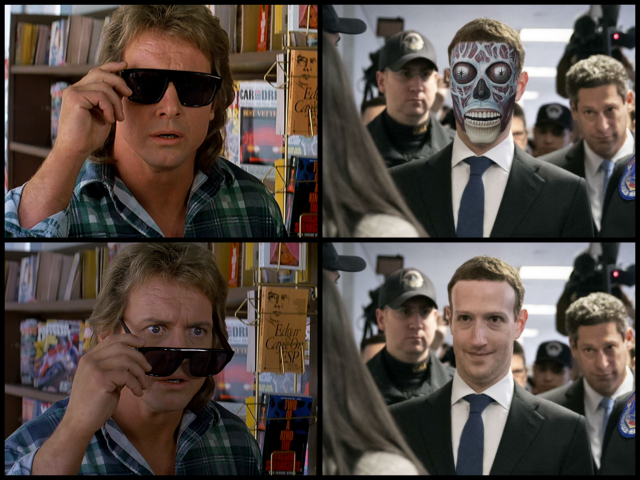 Tiger Beat on the Potomac (thanks Charlie!) morning email thingy leads with:

— A whole bunch of news about Facebook: It’s odd for several news outlets to release major stories on a Friday evening absent an urgent reason. But that’s what happened with a glut of stories drawn from previously unreported internal documents at the social media behemoth.The highlights:

And over at their competition, Axios’ morning email:

A gusher of Facebook stories hit the web last night and will cascade into next week, as a consortium of at least 17 news organizations unfurl a series branded “The Facebook Papers,” based on documents from whistleblower Frances Haugen.

⚡ As supporters of Donald Trump stormed the U.S. Capitol on Jan. 6, Facebook engineers in California were racing to tweak internal controls to slow the spread of misinformation, AP reports.

Inside Facebook, some employees “took to an internal discussion board to express shock and outrage,” Bloomberg reports:

🥊 Facebook responds: “We are a significant social media platform so it’s only natural for content about major events like that to show up on Facebook. But responsibility for the insurrection itself falls squarely on the insurrectionists … and those who incited them.” Keep reading.

What’s next: Facebook reports earnings Monday, and is reportedly planning a corporate rebrand with a new corporate name.

And NBC gives us a case study:

In summer 2019, a new Facebook user named Carol Smith signed up for the platform, describing herself as a politically conservative mother from Wilmington, North Carolina. Smith’s account indicated an interest in politics, parenting and Christianity and followed a few of her favorite brands, including Fox News and then-President Donald Trump.

Though Smith had never expressed interest in conspiracy theories, in just two days Facebook was recommending she join groups dedicated to QAnon, a sprawling and baseless conspiracy theory and movement that claimed Trump was secretly saving the world from a cabal of pedophiles and Satanists.

Smith didn’t follow the recommended QAnon groups, but whatever algorithm Facebook was using to determine how she should engage with the platform pushed ahead just the same. Within one week, Smith’s feed was full of groups and pages that had violated Facebook’s own rules, including those against hate speech and disinformation.

Smith wasn’t a real person. A researcher employed by Facebook invented the account, along with those of other fictitious “test users” in 2019 and 2020, as part of an experiment in studying the platform’s role in misinforming and polarizing users through its recommendations systems.

You want to keep in touch with the grandkids or whatevs: call them. Video chat with them, you can do everything you did before Facebook and you can do it better without it leading to insurrection.

Delete your accounts. You’ll be glad you did.