There is a lot of negativity in our Failed Political Press ™ this morning, and Der Tiger Beat auf dem Potomac (thanks Charlie with an assist from Watertiger) leads, breathlessly (emphasis theirs):

THE NEXT FIGHT: SHORT, OR LONG-TERM POLICIES? In a “Dear Colleague” letter last night, Speaker NANCY PELOSI fired off a warning to the White House and progressives on reconciliation. She suggested her caucus wants to coalesce around a smaller list of policy changes that would last longer, writing: “Overwhelmingly, the guidance I am receiving from Members is to do fewer things well so that we can still have a transformative impact on families.”

That might seem mundane, but it’s not. Progressives have been pushing for leaders to adopt their whole wishlist of proposals from universal Pre-K and free college to dental and vision for Medicare — and cut the price tag by having them expire in a few years’ time. The idea, they argue, is to set up a bunch of mini cliffs and dare Republicans to let popular programs expire.

In a recent meeting with progressives, President JOE BIDEN signaled an openness to this idea. Separately, we have heard from senior Democrats that the White House is leaning toward this possibility. But a large swath of the House, including some in Pelosi’s leadership orbit, would rather shore up the ACA permanently, for example, or extend the enhanced child tax credit for a longer period of time rather than “make Biden’s [entire] legacy contingent on Republicans,” as one senior Democratic aide put it.

— Related: BuzzFeed News’ Paul McLeod has more on what a slash and trim approach across the entire spending package would do to certain programs. By adopting this strategy, “Democrats will have to choose between greatly watering down all of their policies or giving up on some big promises,” McLeod writes.

There is a reason that some states are swing states: they vote out the bums on a regular basis. The representatives who stick around are not centrists, they stick with the agenda. Undermining the agenda to appease the right never works. They vote them out anyway. 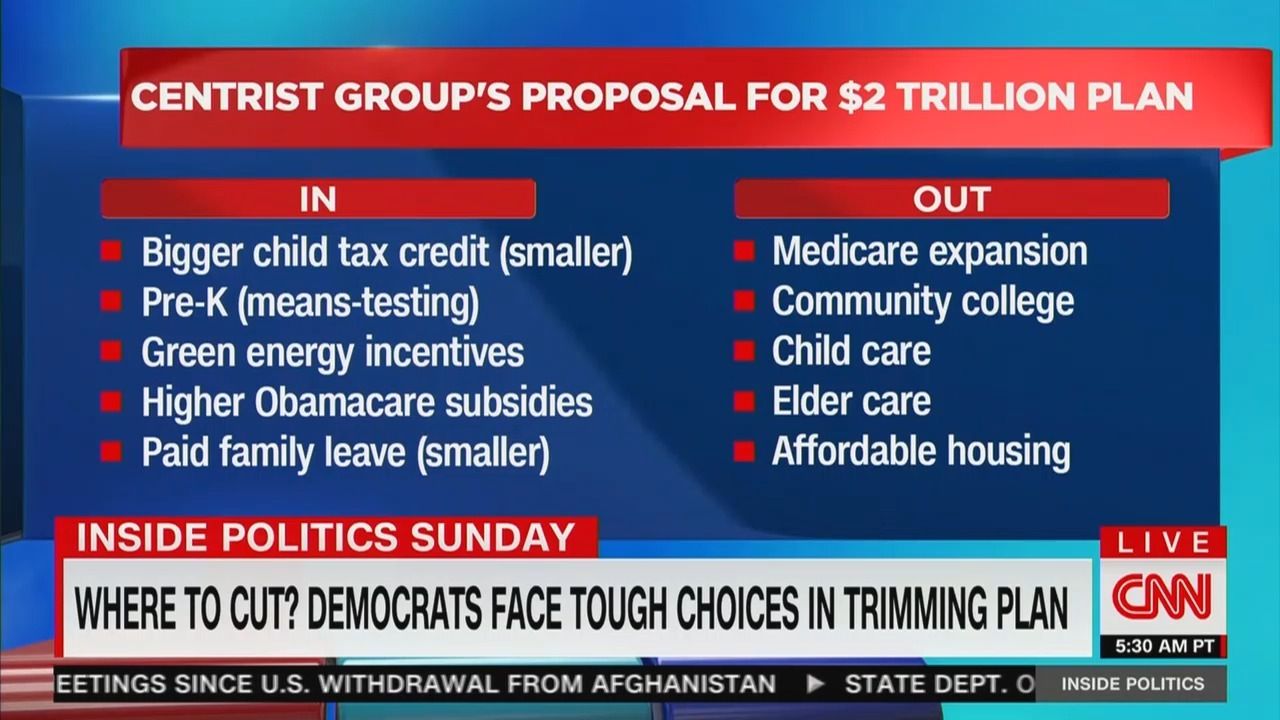 While shoring up the things we already have is nice, no one is going to notice that the tax credit you have today, you have tomorrow. Voters notice SHINEY NEW THINGS, like dental/vision care, free community college, and some protection from our climate catastrophe. You know, the Biden Agenda that Voters voted those mugs in to make real.

Catering to the centrists is always a bad idea. Biden’s agenda is what got the Dims elected, they need to support it, red of tooth and claw, as the poem says.