When Accusations Are Confessions, Part Infinity 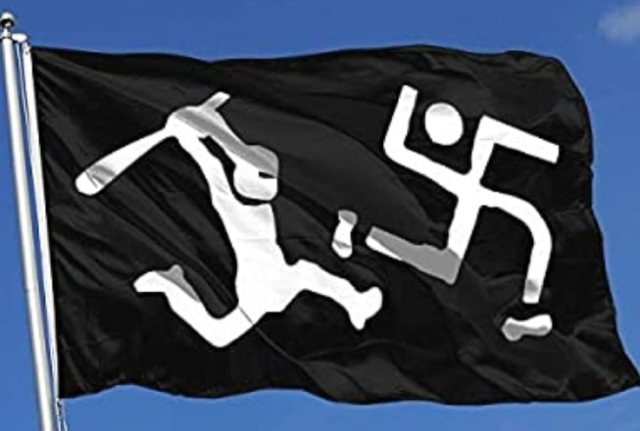 We hate saying, “we told you so” (actually we kinda like it):

[Ivan Harrison Hunter, 24, of Boerne, Texas] admitted that he fired 13 rounds from an AK-47-style rifle into the 3rd precinct police station on May 28, 2020, as other rioters looted and set fire to the building after police evacuated. No one was struck by the gunfire.

After shooting at the building, Hunter was recorded on video high-fiving another person and yelling “Justice for Floyd!” Investigators matched the skull mask Hunter was wearing in the video to a photo on his Facebook page.

Prosecutors say Hunter came to Minneapolis in the days following Floyd’s murder after corresponding on Facebook with Michael Solomon of New Brighton, Minn., and Benjamin Teeterof Hampstead, N.C. The men had been part of the “Boogaloo Bois,” a group that exploits tensions to further violence.

Here in the People’s Republic of Seattle, the Boogaloo Bois were stirring things up during the peaceful Floyd murder protest march. They were ever-present during the CHOP occupation, we learned to avoid those blocks if we saw Hawaiian shirts and/or Idaho license plates.

According to the Southern Poverty Law Center (SPLC), the group presents itself as libertarian and race-blind and calls for armed insurrection against what they see as government tyranny. But the SPLC says the Boogaloo Bois’ origins are violently racist. The group emerged online early in the last decade, and “boogaloo” was associated with a call for a race war. The term is often used by white nationalists and those seeking to generate chaos.

The Boogaloos (and the 4th Reich, generally) tried to pass off violence as being from Antifa, but, you know: accusations are confessions with these dopes. Also: there is no Antifa. That’s a figment of the Fascists imagination.

1 Response to When Accusations Are Confessions, Part Infinity