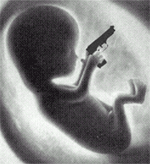 Your rapist’s baby is a future Patriot, ladies!

BREAKING OVERNIGHT: The Supreme Court, by 5 to 4, declined to block Texas’s law banning abortions after six weeks — a strong but not final indication that the court will soon overturn Roe v. Wade … Conservative majority cites “complex,” “novel” legal technicalities and insists constitutionality can still be reviewed later on … Chief Justice JOHN ROBERTS and the court’s three liberals write outraged dissents describing the law as clearly unconstitutional and blasting the majority for shirking their duty. … The ruling, per AP, “for now [strips] most women of the right to an abortion in the nation’s second-largest state.”

I guess John ‘Show Tunes’ Roberts is worried about his legacy again?

The 5-4 decision that came down just before midnight Wednesday was not far from what many courtwatchers expected after the deadline for the law to go into force came and went Tuesday night without any announcement from the justices. However, the ruling was notable for a few things:

— The court’s majority acknowledged that the Texas law may well be unconstitutional, saying the law’s opponents had “raised serious questions” about its impact on abortion rights that — for now — remain guaranteed under existing law by Roe v. Wade.

— Roberts, who has parted company with his conservative colleagues in a series of high-profile cases, did so again over the Texas law and sided with the liberals in declaring that the court should have prevented the novel anti-abortion measure from taking effect.

— All four of the dissenting justices authored dissents, a highly unusual move for a case on the court’s emergency or “shadow” docket. The fusillade of opinions seemed intended to signal a degree of outrage from the dissenters over the court’s move.

And while we slag TBotP with regularity (and rightfully so), they do suss-out what they think are likely scenarios:

The ruling is unlikely to be the last word from the court on the Texas law. While abortion rights supporters think they have little chance of persuading Justices CLARENCE THOMAS, SAMUEL ALITO or NEIL GORSUCH to act against the legislation, they still hope that either Justice BRETT KAVANAUGHor Justice AMY CONEY BARRETT might side with the law’s opponents if the issue gets before them in a different legal vehicle.

I think that they are kidding themselves if they think that Justice Coathanger is persuadable, so it all comes down to the Virgin Mayor of Keg City Brett Kavanaugh again.

“[T]he ruling was certain to fuel the hopes of abortion opponents and fears of abortion rights advocates as the court takes up a separate case in its new term this fall to decide whether Roe v. Wade, the landmark 1973 decision establishing a constitutional right to the procedure, should be overruled. It also left Texas abortion providers turning away patients as they scrambled to comply with the law, which prohibits abortions after roughly six weeks.”

PSA: The NYTimes has a useful Cut-Out-and-Keep on the Texas law — and its “novel enforcement mechanism” — here.

‘“We are devastated that the Supreme Court has refused to block a law that blatantly violates Roe v. Wade,’ said NANCY NORTHUP, president and chief executive of the Center for Reproductive Rights, one of the groups suing Texas. … Longtime abortion opponents claimed Wednesday as ‘a historic and hopeful day’ in Texas, and some began soliciting tips on who might violate the ban.

The Texas law will significantly impair women’s access to the health care they need, particularly for communities of color and individuals with low incomes. And, outrageously, it deputizes private citizens to bring lawsuits against anyone who they believe has helped another person get an abortion, which might even include family members, health care workers, front desk staff at a health care clinic, or strangers with no connection to the individual.

We keep saying that elections have consequences, and stripping women of their rights sure seems to be one of them.

Abortion rights is hugely popular (52% to 36%) so it is a winning issue for Democrats to support.

You don’t have be a Gawd-bothering fetus-fondler to see this Texas law as dystopian. Encouraging everyone to spy on each other to enforce an unpopular law is bad public policy, Texas-style.

Texas nationalized Abortion for the mid-terms with this stupid exercise in 1984’s Junior Spies-style snitching. Let’s take advantage of it.