The Fall of Kabul… 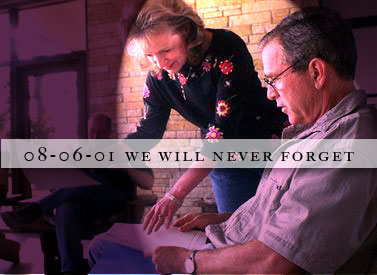 Harriet Miers, serving as Assistant to the President and Staff Secretary, gave George W. Bush his Presidential Daily Briefing entitled Bin Laden determined to strike in US. He went off on a bike ride, and took no action. He was on vacation, after all.

This picture was taken that day, this might actually be the ill-fated memo.

September 11, followed, and the rest is our sad history. For me, this date marks the absolute descent into Hell, the exact moment when we had our souls ripped away and so much tragedy, so much grief, so much suffering around the world really began in earnest.

Take a moment today to consider what might have been different if the idiot son of an asshole, an illiterate, dry-drunk, sonofabitch had not been illegally installed by The Supreme Court to be our president.

There are hard truths here. For soldiers who fought in Afghanistan, it is difficult to acknowledge that we gave them both a mission they could and did courageously achieve–defeating extremist cells–and one that was always impossible–permanently remaking Afghanistan.

…and the US is evacuating another embassy in Asia. (And we note that the media’s technology is vastly improved since the Fall of Saigon, so expect the coverage and imagery to be more dramatic.)

“Taliban fighters entered Kabul on Sunday and sought the unconditional surrender of the central government, officials said, as Afghans and foreigners alike raced for the exit, signaling the end of a 20-year Western experiment aimed at remaking Afghanistan.

“The beleaguered central government meanwhile sought an interim administration, but increasingly had few cards to play. Civilians fearing that the Taliban could reimpose a brutal rule that all but eliminated women’s rights rushed to leave the country, lining up at cash machines to withdraw their life savings. Helicopters buzzed overhead, some apparently evacuating personnel at the U.S. Embassy.”

The Taliban, who was our target in the ugly beginning, has returned with all the violence and cruelty intact.

These cards were dealt 20 years ago, President Biden didn’t have a lot of options (Hair Füror had already committed to withdrawal); the details of leaving could have been handled better, but the results would be exactly the same. Two months, two years, two decades more to leave, it wouldn’t matter.

So, thanks a lot, Chimpy. Your legacy of epic failure continues unabated.

Will we ever learn our lesson?

(I’m filing Afghanistan under “Shit the Left was right about all along.”)

(Note: sorry for the lack of posts, but Our Failed Political Press™ is making this the only story today, and they are presenting it without context.)

This entry was posted in Afghanistan, Chimpy's Great Adventure. Bookmark the permalink.

29 Responses to The Fall of Kabul…