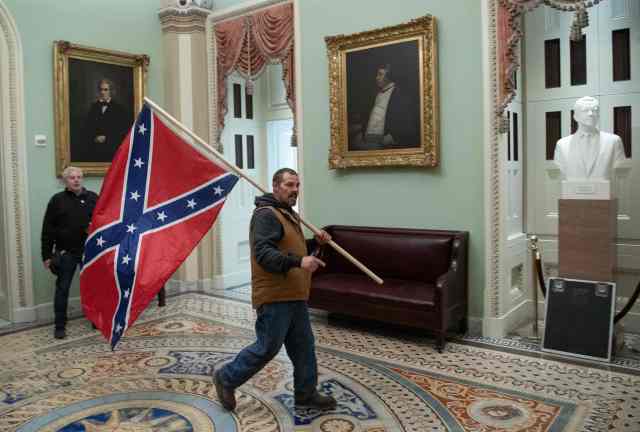 If the Jan. 6 Insurrection Commission want to look for a pattern of behavior from Hair Füror that proves his intent on other throwing the government, ANOTHER smoking gun has landed in their laps:

Top members of the Department of Justice last year rebuffed another DOJ official who asked them to urge officials in Georgia to investigate and perhaps overturn President Joe Biden’s victory in the state — long a bitter point of contention for former President Donald Trump and his team — before the results were certified by Congress, emails reviewed by ABC News show.

The emails, dated Dec. 28, 2020, show the former acting head of DOJ’s civil division, Jeffrey Clark, circulating a draft letter — which he wanted then-acting attorney general Jeffrey Rosen and acting deputy attorney general Richard Donoghue to sign off on — urging Georgia’s governor and other top officials to convene the state legislature into a special session so lawmakers could investigate claims of voter fraud.

The ABC post has the letter, by the way.

Clark attached the draft letter in an email to Rosen and Donoghue telling them “I think we should get it out as soon as possible.”

“Personally, I see no valid downsides to sending out the letter,” Clark wrote. “I put it together quickly and would want to do a formal cite check before sending but I don’t think we should let unnecessary moss grow on this.”

So if we add this to the news last week that Hair Füror hisself pressured Rosen to declare that the election was corrupt and that he and his flying monkeys would do the rest, we’re getting clear evidence that the plan always was to overthrow the results of the election. When that failed, well, violent insurrection followed. It is part of a series of escalation.

“The Gateway Pundit’s small role in Trump’s endeavor to weaponize the DOJ against the American electoral process underscores just how easily a discredited far-right media site established a pipeline to the decision-making of the then most powerful person on Earth. It also shows how this one website … managed to play a part in fueling the efforts that brought the country to the brink of democratic rupture.

“[D]uring the final weeks of his presidency, administration officials saw Trump on multiple occasions holding printed-out pages of Gateway Pundit articles in the White House, sometimes in the Oval Office. [A] former senior official recalled one instance when Trump handed them a page printed from the website, which nonsensically alleged massive pro-Biden fraud, and told the official to find out more and to do something about it.”

This entry was posted in Insurrection, People Dumber than Dolphins, snark, The Coup Klux Klan (Republicans), The Stupid Coup. Bookmark the permalink.