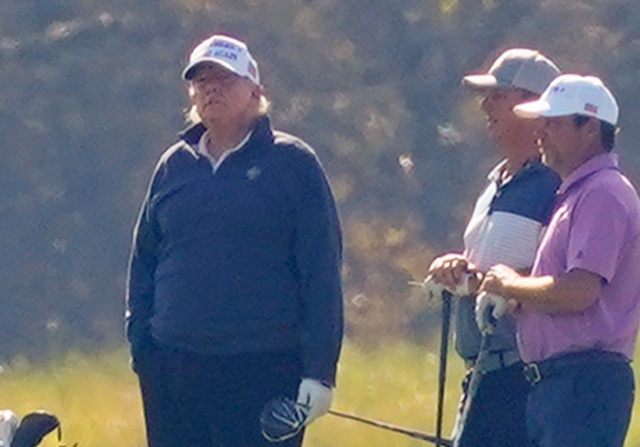 Watching his immunity slip away into the distance

Be prepared for a shock, Gentle Readers: it seems that twice-impeached LOSER ex-prznint Stupid is still gouging Wee the Peeple for his security detail. Talk about bad LOSERS!

Former president Donald Trump’s golf club in Bedminster, N.J., charged the Secret Service nearly $10,200 for guest rooms used by his protective detail during Trump’s first month at the club this summer, newly released spending records show. The records—released by the Secret Service in response to a public-records request—show that the ex-president has continued a habit he began in the first days of his presidency: charging rent to the agency that protects his life. Since Trump left office in January, U.S. taxpayers have paid Trump’s businesses more than $50,000 for rooms used by Secret Service agents, records show.

Legal experts have said there are no laws to prohibit Trump’s company from charging the Secret Service rent at his properties, either during or after his presidency. The rate is effectively up to him: By law, the Secret Service can pay whatever it must to rent rooms near its protectees for use as command posts and meeting rooms. “The service is more focused on the protective necessity, as opposed to, ‘How much is it going to cost after the fact?’ There’s nothing they can do” if rates are high, said Jonathan Wackrow, a longtime Secret Service agent who now works for the consulting firm Teneo. “It’s a question of not, ‘Can they do it?’ but ‘Should they be charging that much?’”

No. Lord Damp Nut’s security should not also be a profit center for his tax-avoiding criminal enterprise.

Repeat our mantra after me: I curse the dedication and professionalism of the Secret Service and pray that they have Just One Bad Day on this detail.