Hair Füror Confirms What We Suspected 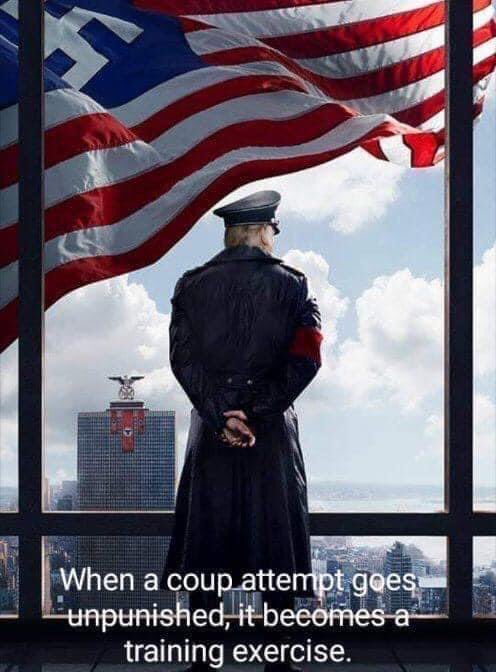 Trump: "If you say it long enough, hard enough, often enough, people will start to believe it." pic.twitter.com/XBIyxfbDBH

There’s a moment when he suddenly realizes that he’s given away Goebbels’ Big Lie strategy (and that’s really the name of it, weird coninky dink, innit?) and tries to project his strategy on others. Too late, Dumbo.

But as long as we’re going down Hair Füror’s 4th Reich rabbit hole (Nazi bunnies? Is that a thing?), here’s an excerpt from a new book coming out that has yet another Nazi-affirmative quote from Hair Füror:

On a visit to Europe to mark the 100th anniversary of the end of the first world war, Donald Trump insisted to his then chief of staff, John Kelly: “Well, Hitler did a lot of good things.” The remark from the former U.S. president on the 2018 trip, which reportedly “stunned” Kelly, a retired U.S. Marine Corps general, is reported in a new book by Michael Bender of The Wall Street Journal.

Bender reports that Trump made the remark during an impromptu history lesson in which Kelly “reminded the president which countries were on which side during the conflict” and “connected the dots from the first world war to the second world war and all of Hitler’s atrocities.”

Bender says unnamed sources reported that Kelly “told the president that he was wrong, but Trump was undeterred,” emphasizing German economic recovery under Hitler during the 1930s. “Kelly pushed back again,” Bender writes, “and argued that the German people would have been better off poor than subjected to the Nazi genocide.” Bender adds that Kelly told Trump that even if his claim about the German economy under the Nazis after 1933 were true, “you cannot ever say anything supportive of Adolf Hitler. You just can’t.”

As has been widely reported, Trump keeps a book of Hitler’s speeches next to his bed.

Once is an accident, twice is a coincidence, but three times is a collection. I don’t think we need Occam’s Razor to know that Hair Füror is a Nazi enthusiast.

This entry was posted in Lord Damp Nut, The Russian Usurper, Nazis. Bookmark the permalink.

6 Responses to Hair Füror Confirms What We Suspected