A Toast To A Life Well-Lived: Scissorhead Dennis Cole

As you know we Irish have a different perspective on Death. We know we will go to the Good Place and it is the good place because there won’t be any English* there, or so me blessed Irish Dad used to say.

And that’s why we have wakes: because we’re happy that the deceased got away from the English*.  [“The lucky bastards” – me Irish Dad, again.]

We Irish love a good party, too, and Dennis would be mad as all hell to miss his own wake, so he decided to hold it while he is still with us, above ground.

Dennis came roaring into MPS like Steve McQueen in a Mustang in SF, revving with comments profound, profane and funny. His spitballs were high octane, fast & furious, and if I can think of another car metaphor I’d include it. But the point is, this Scissorhead was running on all cylinders. DC (the Meme KING! and Pun-Dit) will be missed.

What follows is from Dennis and reflects what he wants us to know.

We will be keeping this post up on top this week to make sure all the Scissorheads get the news and have a chance to say goodbye in the comments.

Be sure to hoist the beverage of your choice and toast our friend on his journey away from the English*.

*  I suggest substituting “Republican” for “English,” but you do you.

The time has come to speak of things; of ceiling wax and the Estate Tax, of being lax, unlike birds on the wing. Of speaking out, instead of just peeking out, to see if the coast is clear.

Of standing up, and shouting loudly, proclaim who you are, and say so proudly. Of chicken bones, and sacred stones, and coins that won’t get tossed. But never fear, for Karma’s here, our causes must surely not be lost.

Folks, the sad fact of the matter is I’m finally dying. As in, the final stages of my CHF – Congestive Heart Failure. MY EF (Ejection fraction, that final strong pulse of the L Ventricle to send the blood that nourishes my organs, and keep them supplied with enough oxygen, is down to 20% or so, and I’m undergoing what they say is “Cascading Organ Failure.” My kidneys are at Stage 3, which means if I drop into Stage 4, I will need regular Dialysis treatments, and I only have about a half a liver these days, although my spleen and pancreas seem to be holding in there OK.

The Hospice organization I chose has done remarkable, extraordinary things, and they seem to make shit happen with just a phone call to get a Dr’s OK, and then to place the order, and have it arrive only a coupla hours later

And I have no expected day to die, they can’t pin it down, so they have to rely on past instances, since everyone’s different. All they can go by are my current symptoms, compared to what previous patients have gone thru, and they estimated I had 6 months left back on Feb 25th. So, I just wanted to say it’s not quite a final farewell, but it’s imminent. One day, in the next 6 months or so, I’ll just drop off of your screens, never to be heard from again, so this way, you’ll know what happened to me, and why.

And I must say it’s been an honor and a privilege to be amongst such folks as think alike, and much as I do. It’s been a pleasure, and we don’t all get along all the time but we keep it civilized.

Which brings up Facebook. I know how most of you feel about FB, but it’s mostly due to bad experiences with unwelcome strangers; coz if you got disgusted by some of your friend’s bad behavior, that has rarely happened to me, and I’ve gotten a lot of enjoyment out of daily use. I have a very select group of friends, and we all share common interests, much like here, on MPS.

I have used it to connect with old friends, as well as make new ones; I belong to a chat room adminned by a polymath in Sweden, I’m friends with a neurologist in Hong Kong, and I have friends in Australia the UK, Ireland and Scotland – all over the world.

What I do mainly is just post political ‘toons and memes, or just plain witty stuff, and I borrow heavily from Scottie’s daily morning ‘toon-fest, along with other boggers and blogesses, and from my own subscriptions.

And without FB, I would never have been able to create something by collaborating with some dude, who requested my friendship a coupla years back. I checked out HIS Page, and was amazed by what I saw; after you watch the presentation he made for me, in only a day-and-a-half*, I’d urge you to check his Home Page out. It’s NOT on FB, he has his own website, so hear goes: (pun intended.) 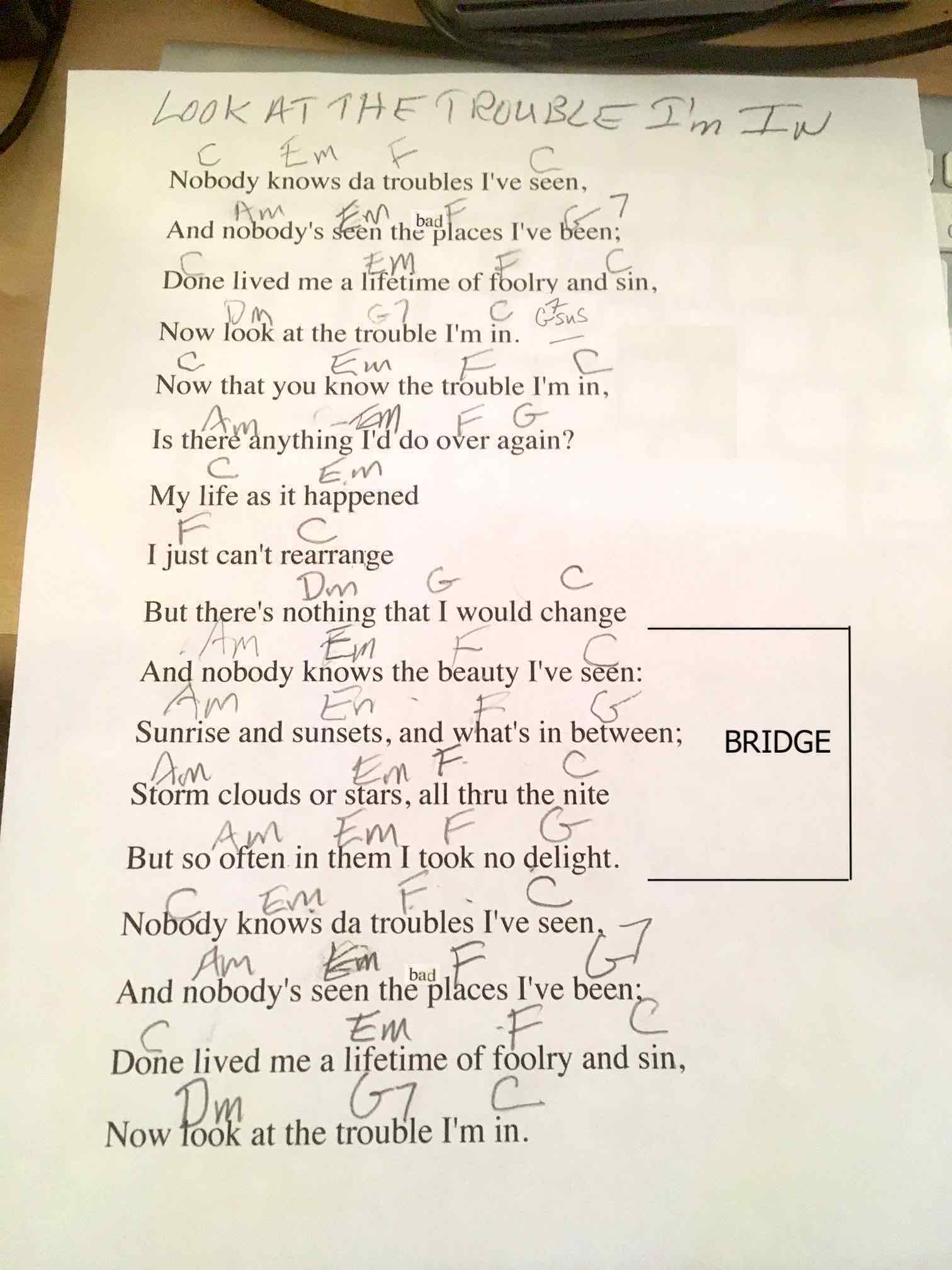 Nobody knows da troubles I’ve seen,
And nobody’s seen the bad places I’ve been;
Done lived me a lifetime of fool’ry and sin,
Now look at the trouble I’m in.Now that you know the trouble I’m in,
Is there anything I’d do over again?
My life as it happened
I just can’t rearrange
But there’s nothing that I would changeAnd nobody knows the beauty I’ve seen:
Sunrise and sunsets, and what’s in between;
Storm clouds or stars, all thru the nite
But so often in them I took no delight.

Nobody knows da troubles I’ve seen,
And nobody’s seen the bad places I’ve been;
Done lived me a lifetime of fool’ry and sin,
Now look at the trouble I’m in.

Once again, it’s been maaaahhvelous, dollinks. I’m totally at peace, I’m all but ready to go, after 25 years of Chronic Pain that could only be marginally reduced with the use of the strongest opioids they could render, which was never enough to actually eliminate the pain, or get it down to under 5 on the Pain Scale of 1 – 10, with one being lowest.
Now that I’m under Hospice Care, they WANT me doped up sufficiently enough to reduce the level down that low, while monitoring me, to ensure I can still function. The next increase they give me will mean surrendering my driver’s license, but by then my son will be taking the Family Medical leave from his job, to spend more time with me, because I will be good & doped up – at least as much as I wanna be, because my tolerances have built up to such high levels that they’re going to have to make a double-strength formula of the drugs they give me to end my life.

It’s NOT considered suicide, it’s a humane way out of a life filled with pain, that’s only going to get worse. I DON’T want to get so bad they put me in a Senior Home, or warehouse me in an Assisted Living Center, because I won’t be able to invoke my right to ease out, and I would have to check out, and get checked into a motel, to complete the process.

I’ve lived a pretty full life in 67 years; I did the kind of work I loved – home building & remodeling, mostly for the instant gratification, of seeing a project come to fruition via the use of my own hands, and the knowledge I gained in the 35 yrs or so I worked in that occupation. It was dirty, hard, sweaty work but I loved it!

Hoping the door don’t slap my ass too hard, I remain forever an incorrigible spitballer, and a proud member of MPS.

Over and out, keep calm, carry on, and remain wary, and hoist one in my memory, if you care to…

This entry was posted in Goodbye, Scissorheads Rule. Bookmark the permalink.

78 Responses to A Toast To A Life Well-Lived: Scissorhead Dennis Cole