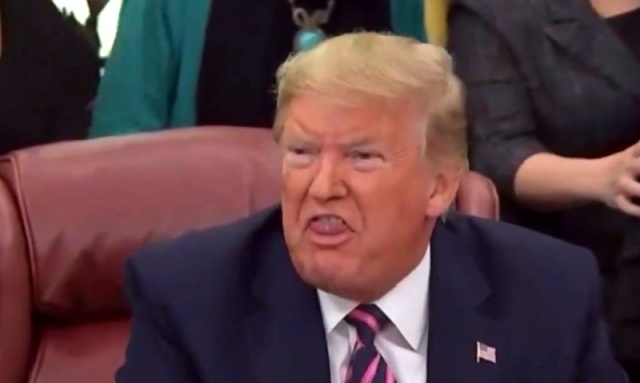 As the Trump-Virus continues to ravage unabated (yesterday, North Dakota crossed a devastating threshold: 1 out of 800 people there have died of the Trump-Virus), people are being evicted onto the streets in December with a pandemic raging because no one has a job or any money, and Lord Damp Nut has his finger on the public’s pulse and springs into decisive action:

…..Therefore, if the very dangerous & unfair Section 230 is not completely terminated as part of the National Defense Authorization Act (NDAA), I will be forced to unequivocally VETO the Bill when sent to the very beautiful Resolute desk. Take back America NOW. Thank you!

“Trump’s push to repeal the protections, known as Section 230, has become the most contentious remaining issue in talks on the National Defense Authorization Act. The president ratcheted up the pressure on Congress in a pair of tweets Tuesday night, threatening to nix the $740 billion bill unless it includes the repeal…

“…It’s the second time Trump has threatened to veto the defense bill. Over the summer, Trump pledged to tank the bill over a provision to remove the names of Confederate leaders from Army bases.”

Section 230 protects online companies such as Facebook and Twitter from lawsuits over content posted on their platforms. He wants to sue them for being mean to him. What he probably doesn’t see (and surely cannot understand) is that this would become content moderation and his own behavior on these platforms would have him banned.