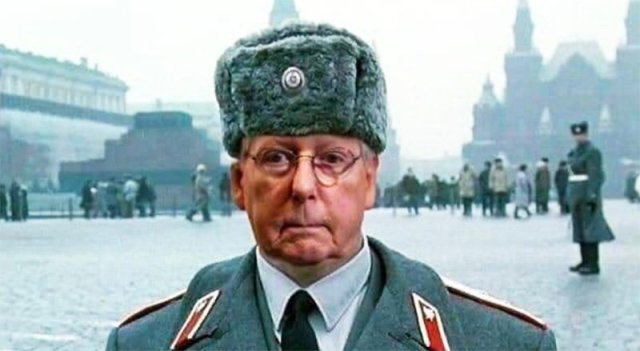 Axios morning email thingie is warning us that #MoscowMitch already is planning on eff’ing the ol’ rat to stop Handsome President Biden’s agenda:

Mitch McConnell, if he keeps the Senate majority, plans to prevent Joe Biden from stacking his Cabinet with liberals and force him to go with more centrist options, like Lael Brainard for Treasury or Tony Blinken for State, sources tell me.

It’s Axios who says that Biden doesn’t want any progressives, not Biden himself. Just noting that this is Village conventional wisdom punditry is that the problem is progressives and not Mitch. This is not analysis.

Our pals at Electoral-Vote see a path out of ampy be-chinned Mitch’s treachery:

If McConnell wants to play hardball—and even though he represents the Kentucky Derby state, horseshoes is definitely not his game—Biden would be between a rock and a hard place. Suppose McConnell wanted to name half the cabinet and all judges and justices for the next 4 years? What could Biden do?

If the Republicans control the Senate with 51 or 52 seats, there is one ploy a President Biden could try. Sens. Pat Toomey (R-PA), Ron Johnson (R-WI), and Richard Burr (R-NC) have all announced that they will not seek reelection in 2022. Biden could offer one or more of them cabinet positions. It just so happens that all three of their states have Democratic governors. In Pennsylvania and North Carolina, the governor appoints the new senator, who would surely be a Democrat. In Wisconsin, there is a special election, which a Democrat would have a decent shot at winning.

Picking off a couple of Republican senators and putting them in the cabinet would be a twofer for Biden. First, it could change control of the Senate. Second, it would please those voters who see bipartisanship as a goal unto itself. Needless to say Mitch McConnell would be beyond furious at such a move, but Toomey, Johnson, and Burr would be looking out for themselves, not for McConnell. Toomey is a former banker. He is not especially Trumpy and seems like a decent person. He likes to keep a bowl of Hershey bars (which are made in his state) well stocked for chocolate-loving senators. Making him secretary of the treasury would enrage many Democrats, but if the tradeoff was getting control of the Senate in return, Biden might do it. Johnson was a former businessman and might accept the position of secretary of commerce. Burr sold lawn equipment for 17 years before running for the House. There is no secretary of lawn equipment. Lawns are plants, so maybe secretary of agriculture? Or since lawns are often located near houses, how about secretary of housing and urban development. After all, the current secretary is Ben Carson, whose only qualification is that he used to live in a house. Burr is slightly toxic on account of some insider trading stuff earlier this year, but most people (1) don’t know what insider trading is and (2) don’t know that Burr did it. Burr might take the job to rehabiliate himself.

Could a desperate McConnell block a vote on their confirmation? Yes, but they have a countermove: resign from the Senate on Feb. 1. If the Senate were 52-48 and Toomey and Burr resigned and were instantly replaced by appointed Democrats, the Senate would be 50-50 and the new president of the Senate, Kamala Harris would have something to do all day. This scenario definitely falls under the category “hardball,” which is not Biden’s preferred way of operating. He might think that he can reason with McConnell and work together with him, but if he goes down that road, he will quickly discover that it leads to a dead end.

We should note that plenty of Presidents have done this exact thing, it’s not exactly a secret tactic, but it is telling that Axios didn’t mention this possibility at all.