Trump Is What ‘Burning It All To The Ground’ Looks Like 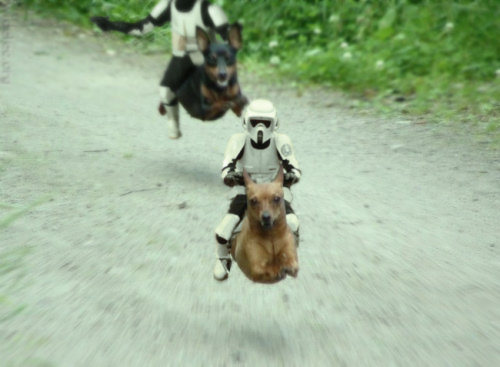 May the Doxie Be With You!

Axios dives into this post and OUR comments (check-out the Pelosi bit, for instance), well, kinda (enigmatic emboldening is theirs):

Furious Democrats are considering total war — profound changes to two branches of government, and even adding stars to the flag — if Republicans jam through a Supreme Court nominee, then lose control of the Senate.

Why it matters: Democrats are enraged by GOP hypocrisy of rushing through a new justice for President Trump after stalling President Obama’s final nominee.

⚡ On ABC’s “This Week,” George Stephanopoulos asked Speaker Pelosi about the possibility of impeaching President Trump or Attorney General Barr as a way to stall a Supreme Court confirmation in a post-election lame-duck session.

Senate Democratic Leader Chuck Schumer said on a call with his caucus yesterday, after a moment of silence for Justice Ginsburg:

Let’s unpack what that means:

The big picture: Many Democrats see the GOP’s success at filling the federal judiciary with conservatives after Hillary Clinton’s 2016 popular-vote win as a sign that the machine of democracy itself is broken, and view these structural changes as fixes.

And I will remind the burn-it-all-to-the-ground crowd that Trump is exactly that. This is what burning it all to the ground looks like. You already got your wish, now be part of the rebuilding.

Republican Friend: I’ve been a moderate Republican all my life. I voted for Trump last time, but I didn’t think he’d actually win. I can’t bring myself to vote for him this time.
Me: Great. Glad to hear it.
RF: Don’t be too glad. I’m not voting for Biden either.
Me: Those are the only choices. Trump or Biden.
RF: I’m voting for Jo Jorgensen.
Me: Who?
RF: Jo Jorgensen.
Me: Who is Jo Jorgensen when she’s at home?
RF: She’s the Libertarian candidate.
Me: So you’re voting for Trump.
RF: No, I’m voting for Jorgensen.
Me: Same thing.
RF: No, it’s not. I’m voting my conscience.
Me: Bullshit. You’re dodging your conscience.
RF: No, I’m not. I said I can’t bring myself to vote for…
Me: Yeah, I know what you said. And I know what you meant. You mean you don’t want to feel any responsibility if Trump is re-elected.
RF: No, that’s not it.
Me: Bullshit. That’s exactly it. You don’t want to vote for Trump, but you’re not going to do anything to prevent him from being re-elected. You’re more concerned with soothing your conscience than with protecting the Constitution.
RF: That’s not true. Biden won’t fix the nation’s prob…
Me: Does Jo Jorgensen have a popcorn fart’s chance of winning?
RF: No, but that’s not the point. The point is…
Me: Fuck your point. This is a toggle election. The choices are truly binary. Yes or no. Up or down. On or off. Biden or Trump. Those are the only choices.
RF: I have to vote my conscience.
Me: Fuck you and fuck your conscience. You’re a coward.
RF: I’m not a…
Me: You’re dodging all personal responsibility to act for the good of the nation. It’s no different than saying you oppose the pandemic but won’t wear a mask. Fuck you.
RF: It’s not like that at all.
Me: Did I just say ‘Fuck you’? I believe I did. Fuck you again.
RF: Are you angry with me?
Me: Shut up. Go away. Fuck you and everybody you know, you fucking coward.
RF: I understand you’re upset.
RF: Hello?
Former Republican Friend: Hello?

This is no time for cowards.

PS – Brian Fallon is the executive director of Demand Justice, and a former top Schumer aide and Justice Department official.

1. Oppose Trump's nominee prior to the election, invoking the GOP's own rule from 2016.
2. Defeat Trump on Nov 3
3. Keep seat open until Biden takes office
4. If GOP rams Trump pick thru anyway, add seats to the Court

This is the play. There is no other play.