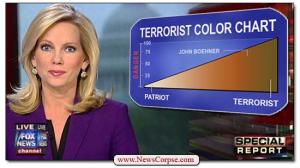 Got it: white is patriotic.

[Ed. Note: We’ve been running this post since the blog began. It is from the SF Chronicle a lifetime ago, from 2006 when we were younger and perhaps less cynical.

And given how Prznint Stupid tried to bring the Taliban to Camp David today to surrender, well, our cynicism is well-supported.

This essay itself has fallen into the void and is no longer on the SF Chron’s servers. I want to ensure that it remains on the web, so I am including it verbatim.

This essay was written by Neva Chonin (author of the long gone and lamented Live! Rude! Girl! column), who has since left The Chron; I do not know where she writes now and I wish I did. I think this essay easily remains the best writing about September 11 that I have encountered. Oh, we’re keeping it on top today, anything new will be below–Tengrain]

He’s one of those average men you pass without noticing. A little tubby, wearing beige Dockers and a pink polo shirt. Not much to look at, were it not for the fact that this particular guy is flying. No, flying is the wrong word — he’s falling, falling through the blue sky, a lifetime of memories clutched in his outstretched hands and nothing we know about below.

I can’t remember when or why I started Googling the words “Sept. 11” and “falling.” I was looking for … something. Chills? Answers? What I found were pictures of the jumpers — the people trapped on the upper floors of the World Trade Center on Sept. 11, 2001, who chose to breathe free one last time before dying. Some leaped from their offices holding hands, lines of them, clinging to one another until gravity and wind tore them apart. A solo jumper, dubbed “The Falling Man” by media, went on to become emblematic of that day’s unanswered questions.

But it’s the guy in the Dockers, my own private falling man, who haunts me. He’s helped me, too, because five years later I think I finally know why the day of his death owns a horror all its own. It’s got nothing to do with flags and national security and God bless America. It’s basic and internal. It’s this: the disorientation of witnessing the average turn surreal, like a Magritte painting that has escaped its frame and invaded the world to upset the equilibrium of what we earnestly call “reality.”

This, too: It’s the shock of seeing an arrogant and seemingly untouchable superpower sucker-punched on its own turf for the first time, not by another superpower but by humans as puny as we are, whose only weapon is their confounding will to die. It’s the eeriness of watching two iconic towers taken out by passenger planes turned passenger missiles. It felt, then as now, like a conspiracy against reason. Jets do not fly into buildings. Except when they do. A guy in Dockers doesn’t fall from the sky. Except when he does. The whole day defied logic, because it couldn’t have happened. Except it did.

I can grasp the horror of civilians in war zones, living under daily bombardment and burying neighbors and family after every air raid. That was my mother’s life, and her stories are programmed into my brain. What I can’t imagine are the feelings of those trapped in either missiles or targets on Sept. 11. I can’t, for instance, fathom seeing office cubicles disintegrate around me, or watching from a coach-class window seat while my plane descends toward the World Trade Center or the wretched Pentagon or, in the case of United 93, a rolling rural blankness. These experiences remain so defiantly strange and outside the repertoire of war that I’m left without context, and without context I’m bewildered. Their singularity defies description. Maybe it was like walking on the moon or surviving a death camp; you had to have been there to know what it was like.

That’s the revelation my falling man gave me: That I will never understand. For me, the tragedy of Sept. 11 has always been measured in political fallout. I remember a friend commenting, two days after the planes hit, “Well, that’s it for Iraq.” He saw the future closing in even then, and he wasn’t the only one.

But the rest of the country — liberal, conservative, atheist, evangelical, gay, straight, black, white — was too busy waving flags to hear reason. Polls continue to show that at least half of the American public believes Saddam Hussein was involved in the attacks. Yes, they are just that stupid. Don’t make excuses for them. Don’t blame Fox News for telling them what they want to hear.

I remember Sandra Bernhard, daring to tell an anti-Bush joke at the Warfield that fall, being booed by a “liberal” San Francisco audience. I also remember writing a column at about the same time questioning where all the flag-waving and jingoism would lead us, and receiving hundreds — yeah, hundreds — of hate letters. That’s not counting the death threats. And I remember getting a few pathetic messages from self-identified Bay Area “progressives” saying they shared my misgivings, but “would never say so in public, of course, ha ha” (actual quote).

Ha ha. See you at the next protest picnic, heroes. If you still think the White House cared about anything more than its own agenda and the cost of real estate when it watched the twin towers go down, if you still believe Bush and company shed one tear for the people trapped in those buildings, well. Wherever your mind’s at must be a sweet, peaceful place. I hope I never go there.

Five years after reality went boom, taking our Constitution, civil rights and common sense with it, I can finally cry for the people who died that day, those whose deaths have been so ruthlessly exploited and memories abused. This, thanks to the image of a guy in Dockers falling through the warm September air. I cry for the unique terror of his death, and I cry because he reminds me of how far we’ve all sunk. His descent lasted less than a minute; we’ve been in a free fall ever since.

PS – Thanks a lot, Chimpy! LATimes: “Seventeen years after Sept. 11, Al Qaeda may be stronger than ever”

4 Responses to September 11: Falling into History