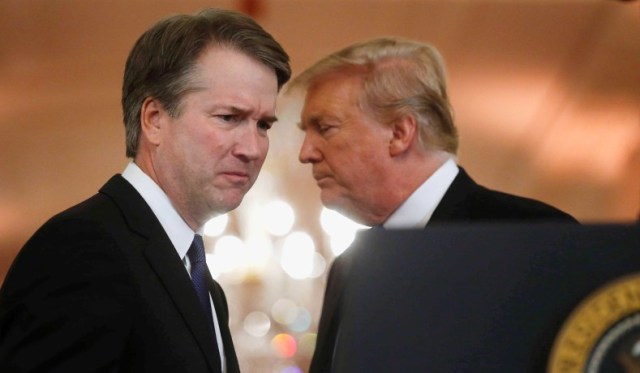 Kiss me, you fool!

I’m glad I’m not a bookie. I have no idea how you make odds for this scenario, and the usual morning email thingies are all over the map.

Anderson Cooper had the scoop at 8 p.m. ET: Ford “wants the FBI to investigate her allegations before talking to the Senate Judiciary Committee about it.”

All of a sudden, the prospect of a televised hearing on Monday seemed less likely.

Attorney Lisa Banks, representing Ford, told Cooper that “there’s no reason that we should have a public hearing on Monday… It’s too important to be rushed through.”

Republicans are privately worried about the risk unleashed by an explosive allegation of a teenage sexual assault by Supreme Court nominee Brett Kavanaugh, but still hope to push ahead to a final confirmation vote next week.

“This is the ugliest situation imaginable,” said a source close to Senate Republican leaders.

Behind the scenes, Republican senators toughened their stance and are hoping to hold a final vote by the end of next week.

Sen. Bob Corker (R-Tenn.) tweeted: “Republicans extended a hand in good faith. If we don’t hear from both sides on Monday [in public or private], let’s vote.”

Senate Majority Leader Mitch McConnell has not put a timeline on when the vote would be. And he is not making predictions on vote counts.

But we’re told that McConnell believes that he will have the 50 votes needed to confirm Kavanaugh (with Vice President Pence breaking a tie, if needed).

ALL OF A SUDDEN, out of seemingly nowhere, it seems like Republicans are gently steering BRETT KAVANAUGH’S Supreme Court nomination back on track.

REPUBLICANS AND DEMOCRATS are at a stalemate. Senate Republicans offered Christine Blasey Ford the chance to testify publicly or privately, but her lawyer said that first the FBI should investigate the three-decade-old sexual assault allegations against Kavanaugh…

WE ALREADY SEE THE DYNAMICS SHIFTING IN THE RANK AND FILE in favor of Kavanaugh. … SEN. BOB CORKER (R-TENN.), who was publicly pushing for a delay, tweeted last night: “After learning of the allegation, Chairman @ChuckGrassley took immediate action to ensure both Dr. Ford and Judge Kavanaugh have the opportunity to be heard, in public or private. Republicans extended a hand in good faith. If we don’t hear from both sides on Monday, let’s vote.”

— WATCH SEN. JEFF FLAKE (R-ARIZ.). He tweeted at 11:50 p.m.: “When Dr. Ford came forward, I said that her voice should be heard and asked the Judiciary Committee to delay its vote on Judge Kavanaugh. It did so. I now implore Dr. Ford to accept the invitation for Monday, in a public or private setting. The committee should hear her voice.”

The once highly orchestrated confirmation process for Supreme Court nominee Brett Kavanaugh has fallen into further partisan disarray. Christine Blasey Ford, the California professor who has accused him of sexual assault, signaled late Tuesday that she would not testify in front of senators until after the FBI had investigated the matter. Republican lawmakers have scoffed at that idea and indicated they would move forward even if Ford didn’t testify. Democrats have called not only for the FBI investigation but also for the sworn testimony of Kavanaugh’s high school friend Mark Judge, who Ford says witnessed the alleged assault. Meanwhile, Ford’s lawyers say she has received death threats, and she’s been subjected to smear campaigns. Ford’s colleagues describe her as a rigorous statistician who doesn’t fudge the data or stray from the facts.

The right-wing smear machine has been lying about Christine Blasey Ford for the past two days.   Ford has been the target of vicious harassment and even death threats. As a result of these kind of threats, her family was forced to relocate out of their home. Her email has been hacked, and she has been impersonated online.

The GOP has a time-line problem. Chuck “I Am NOT A Nail’ Grassley wants to ram this through as quick as an octogenarian at an estate-planning seminar, but if he appears to be a game-rigging sexist, well, he could generate blow-back for the He-Man Woman-Haters club that amply be-chinned Mitch McConnell would really hate: he could lose his majority, and stealing Garland’s SCOTUS seat would all be for nothing.

If the ELEVEN REPUBLICAN MEN on the Judiciary Committee do not give the allegations serious consideration, and then the ELEVEN REPUBLICAN MEN on the Committee all vote to move the nomination forward to the floor of the Senate, then the conventional wisdom is that the GOP will have the Mother of all battles (see what I did there?) keeping college-educated women in their boy’s club. And I suspect that college-educated men will be right there with their wives and voting age daughters (and sons!), too. Also.

This entry was posted in 2018 Pie Fight, Brett Kavanaugh, SCOTUS. Bookmark the permalink.