Georgia: We Don’t Serve Your Kind 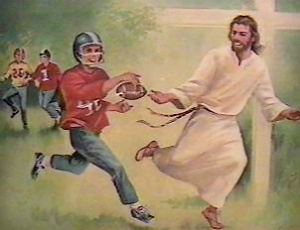 Georgia is the latest state to try to pass a We Don’t Serve Your Kind law, and already the NFL is threatening to boycott Atlanta as a site for a future Super Bowl should the governor sign the bill.

The statement from league spokesman Brian McCarthy reads, “NFL policies emphasize tolerance and inclusiveness, and prohibit discrimination based on age, gender, race, religion, sexual orientation, or any other improper standard. Whether the laws and regulations of a state and local community are consistent with these policies would be one of many factors NFL owners may use to evaluate potential Super Bowl host sites.”

So what’s in the bill, you ask?

The bill would protect faith-based organizations from having to rent or allow its facility to be used for an event it finds “objectionable.”

Objectionable? Let that sink in for a moment So, if they find inter-racial marriage objectionable… or second marriages objectionable, or the virtue of either party (you slut!), or don’t think your religion is “true”… it just never ends.

The changes unveiled Wednesday made more changes after both Gov. Nathan Deal and House Speaker David Ralston, R-Blue Ridge, objected to the Senate version. While the bill still says no pastor can be forced to perform a same-sex wedding ceremony, it adds language that says no individual can be forced to attend one.

And currently, can a pastor be forced to perform a wedding? No. And what is this about forcing someone to attend (and bring a present, you eff-er!)? Seriously, they were worried about this?

These organizations, which include churches, religious schools or associations, would not be required to provide social, educational or charitable services “that violate such faith-based organization’s sincerely held religious belief.” However, the amendment says government can enforce the terms of a grant, contract or other agreement.

A contract is a contract. But the soup kitchen can turn you away. Got it.

…Studies by the Metro Atlanta Chamber and the Atlanta Convention and Visitors Bureau have suggested a negative economic impact of $1 billion to $2 billion if national groups begin boycotting Georgia or canceling conventions and events based on perceived discriminatory efforts by the state.

We keep standing up for the First Amendment, but Y’all Qaeda keeps trying to insert themselves in the middle. This is about forcing their world view on the rest of us, not protecting themselves from the government.

This entry was posted in Homophobia, marriage equality, sports, We Don't Serve Your Kind. Bookmark the permalink.

6 Responses to Georgia: We Don’t Serve Your Kind