Your Saturday Bottomless Mug of Stupid 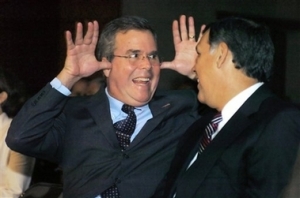 “Jeb Bush, defending his efforts to keep alive Terri Schiavo, a brain-damaged woman, when he was governor of Florida, suggested on Friday that patients on Medicare should be required to sign advance directives dictating their care if they become incapacitated. A similar proposal by President Obama — that doctors should be paid to advise patients on end-of-life decisions — became a political firestorm in 2009, when Sarah Palin, the former Alaska governor and vice-presidential candidate, claimed that the legislation would give bureaucrats the power to decide if some frail or disabled people were deserving of medical care. The assertion was shown to be false.” (NYTimes)

As you may recall, these advanced directives were Mooselini’s infamous Death Panels. I’m really worried that we will have to change Jeb’s MPS sobriquet from The Smart Bush back to the more undeniably accurate NotChimpy.

4 Responses to Your Saturday Bottomless Mug of Stupid