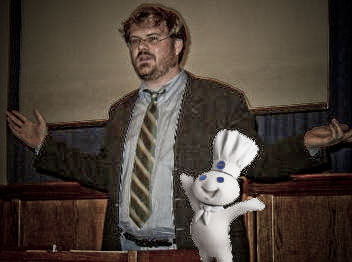 Why do I even look at the NRO (the most intellectually dishonest rest-stop on the information superhighway)? Oh, that’s right! So I can see what would-be public intellectual, legacy hire, and the Worlds Best Son is pontificating about today. And Doughy Pantload never lets me down:

[T]here’s an old joke in the newspaper business, now immortal on the Internet:

“Mmmm… pie,” Jonah didn’t mutter. And if he stopped there, it would be fine.

The Boston Globe is read by people whose parents used to run the country, and they did a far superior job of it, thank you very much . . . ”

And so on. The list gets updated from time to time, and it usually includes, “The National Inquirer is read by people trapped in line at the grocery store.” You get the point.

Jonah never learned the Comedians Prime Directive: Never explain the joke. Of course, Jonah also has no respect for his audience to get the joke, and he may be right about that.

I don’t have the space to rehash the Federalist Papers, but at the federal level there are three branches of government and each one monkey-wrenches the other, all the time. Meanwhile, do you know how many local governments there are in the United States?

“Where’s that pie?,” Jonah barked at the lowly intern.

Some interesting copy editing there. I don’t have the space to rehash the Federalist Papers, but… Meanwhile… I suspect that K-Lo was on the editing desk that day, also weeping to Our Savior about Pie.

Anyway, the column entitled (see what I did there?) “Who’s Running the Country?” continues on for 800 words or so, mostly saying no one is running it (so much for Liberal Fascism), and then concludes thusly:

Me? I like knowing no one is running things because, for starters, it means I’m free.

800 words and that’s the conclusion. Well, thanks for the pie Jonah.

2 Responses to 2-Drink Minimum: The Comedy Stylings of Jonah Goldberg