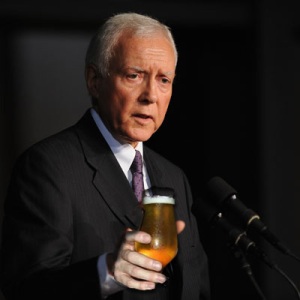 I linked to Zander Versus The Stupid over at Crooks and Liars this morning, and all day I’ve been thinking about what Orrin Hatch said that got ZVTS so agitated.

If all of the Republicans in Congress are cheese balls (they are) then it stands to reason that Orrin Hatch is the vile and oily aerosol cheese of Wingnuttia. Take it away, Orrin:

Bipartisanship! Comity of the Senate! The World’s Greatest Deliberative Body! I tell ya, it’s just shocking that anyone would believe Republicans really want to punish Democrats and the people who voted for them, because those people have to be put in their place, you know.

And that’s exactly what the next two year will be about. Putting the black president and his supporters in their place, and to teach us a lesson. The supposed “will to govern” that Mitch McConnell and John Boehner were talking about has evaporated in less than two weeks…

Now, bear in mind that Orrin Hatch had to scramble to not lose his Senate primary in 2012 to teabaggers (former State Senator Dan Liljenquist and current State Legislator Chris Herrod, especially following the shocking overthrow of his long-time Utahan compatriot, Bob Bennet). Hatch survived the challenge, which was the first time he had been challenged since 1976, and went on to yet another term. (How long is the shelf-life of spray cheese, anyway?) Those of you with longer memories may recall that briefly Hatch was a contender in the 2000 Goat Rodeo, but you know, Turdblossom knee-capped him every step of the way.

If Orrin Hatch wants vengeance, he should start by looking at the people in his own party who have worked like Dr. Chaps’ demons to throw him out of Congress. But you know, like spray cheese, he’s only as good as his cracker.

This entry was posted in snark and tagged cheese balls, Orrin Hatch. Bookmark the permalink.

3 Responses to Orrin Hatch: The Vile Spray Cheese of Wingnuttia