We honor all that is appalling in American Politics with the First Semi-Regular Macaca Awards. 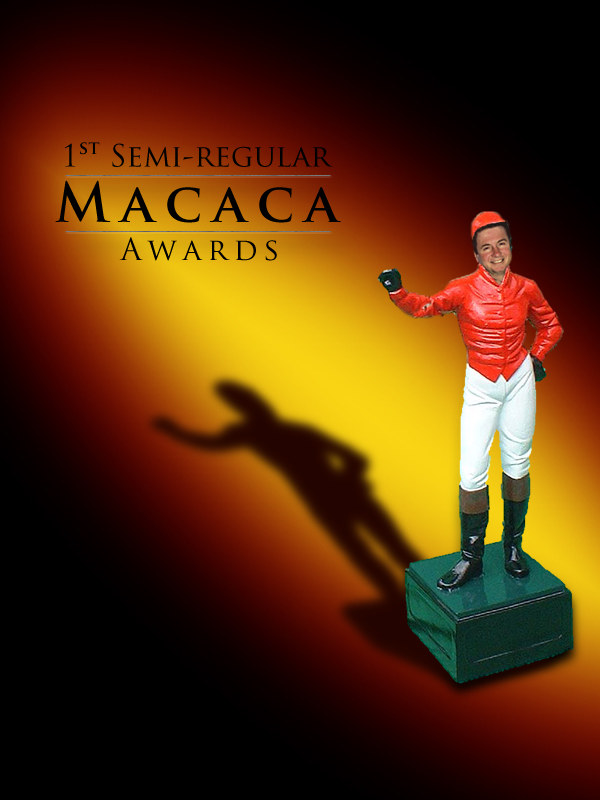 For more on the Macaca Awards, see our announcement.

Tonight’s category of the much-coveted Macaca Award is a topic that is near and dear to all Scissorheads: Theocracy. Our Incorrigible Band of Spitballers are known far and wide as the Scourge of the Theocrats, and so tonight we load up our straws and take aim:

As always, Nonnie has the full sized version at her place, and you have to see this to believe it. I think she could make a fortune selling this as a Christmas Card.

The Nominees for Outstanding Achievement in Promoting a Christian Fundamentalist Theocracy and Pooping on the First Amendment are:

Fellow members of the Academy, get thee hence to the polls to vote for Outstanding Achievement in Promoting Fundamentalist Christian Theocracy and Pooping on the First Amendment.

And remember, there will be new categories each night through the election, with the great reveal of winners of the 2010 Macaca Awards on Election Night!

As always, my unindicted coconspirator, the inestimable Nonnie from Hysterical Raisins has the full-sized poster at her place. Please be sure to go there and pay your respects.

(As always, this post is stuck on top, and fresh snark, if any, is below.)

This entry was posted in Macaca Awards, snark. Bookmark the permalink.